Warning: There will be spoilers.

What can I say about this masterpiece that hasn’t already been said? The theme is the most interesting there could be, that whether it’s right to be bad by choice or to be forced to be good…. tackled beautifully by Anthony Burgess, the author of the novel it’s based upon. And Kubrick has done justice to the book, like I assume he always does with every movie of his.

The story is set in the future, well, atleast the future as perceived by the people in the 1970s. The setting is the work of a genius, and slowly consumes you into it, like you are a part of it. Beethovan’s music is used wonderfully here, and gives Alex’s universe a distinct feel. The language is not exactly the english we speak, infact some words are the author’s invention, but you slowly become accustomed to them, as if you knew them all along. The story is about Alex, a 16 year old boy and his gang of “droogs”. We see in the start how Alex and his friends enjoy a bit of the old “ultra violence” and the old “in-out” a la they are naturally evil. But, the best thing is that it isn’t shoved into our faces and is developed as we see their acts and their reactions. Anyway, Alex becomes the undeclared leader of his group which his friends can’t digest, and betray him thus leading to his capture by police. The scientist’s have come up with a new way to drive “wrong doings” out of prisoners and Alex is picked as the prime candidate and he undergoes the treatment. Now, Alex feels sick whenever violence or sex occur to or around him. But can he really survive in the real world like that.. what happens when his past crimes come face to face with him? You can’t help but be confused, as to how you can feel sorry for such a man! Watch it to find out the whole deal.. I’d spoil it but it’s too good to be spoiled.

The best aspect of the movie is Malcolm McDowell who plays Alex. The man who’s performance is the biggest inspiration of Heath Ledger’s portrayal of Joker in the Dark Knight. A great actor of the likes of Al Pacino I’d say, or even better than him at least in this movie. Others have played their part well too, except a few who seem to be a little misfit in Alex’s universe like his mom. Even though she didn’t have much to work with, my face cringed every time she came on screen.

My judgement, watch it to feel it. Believe me, it will be worth your time. It’s a film that gets you thinking, um.. and humming(seriously I can’t get that song “I am singing in the rain” out of my mid). In Satish’s words, it was to the seventies what fight club is to our generation. 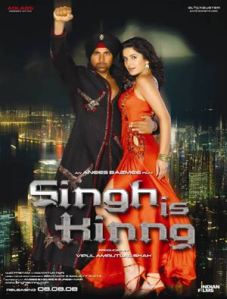 I know, its seems like a crime to me to mention this movie(if it could even justify to be called that) on the same page as the clockwork orange. But, I have to do this crime cuz if I didn’t, most of you would have assumed the post was over and would have left, without noticing the “more” sign at the end of the post…

Anyway, moving on with the review, the film has no story, seriously. It’s just a bunch of crap put up together with a few “bollywood thinks are funny” lines and sidetracks and a pinch of sikhism.

Lucky(Sonu Sood) is the kinng of Australia and rules it with some men very close to him, which also involves Mika(Jaaved Jaafri), his deaf and short sighted brother. Happy(Akshay) is happy go lucky guy who has a habit of playing the hero and helping everyone, even if he destroys half the village doing it. The villagers device a plan to drive him out of the village by convincing him that Lucky’s father’s end is near and he would like to him before dying. He vows to get him back, and is sent to Australia, along with Rangeela, his “langotia yaar”, who knows a little english. They land up on Egypt when their boarding passes get exchanged with some people at the airport. In Egypt, Happy meets Sonia(Kat) while trying to help her catch a thief, and they sing a song. Happy falls in love with her, and decides to come back for her after completing his vow. In Australia, Happy meets Lucky, where he denies to go back. But in a strange accident in which Lucky gets hurt, it is declared that Happy will be the kinng until Lucky is OK. Happy wants to help the lady who fed him when he was lost and hungry in Australia. She had lied to her daughter about them losing their wealth and so, Happy goes onto pose as her manager along with his closest men playing the servants while the lady’s daughter(Sonia), comes back with her fiance Puneet(Ranvir Shorey). Happy and Sonia’s friendship grows, a little of this a little of that..boom! they are married in the end. Everyone’s happy, and Happy and Sonia return to their village along with Lucky, Mika (who turned against him and had a change of heart at the end), and all the other goons.

Seriously now, the characters are very underdeveloped, their motives and actions are unexplained. But, I am ready to overlook that if the film has some bloody comedy. I was seriously counting man, and there was a gap of 30 minutes before I laughted at anything at a point(what could I do except count minutes?). The first half was nice, went by like a breeze, but the second half seemed like Welcome part 2 with the director bent on changing the heart of all the gangsters in every movie of his. Akshay Kumar is the man here, he carries the movie on his shoulders, it would have been worse without him. Katrina is there just to look pretty, which pretty much covers up for her acting(seriously man, she is hot.. or according to one of my friends “kudi tabahi aa”). Sonu Sood is seriously a good actor and carried his role responsibly. Jaaved Jaafri is a talent which does not need to be spoken about, everyone recognises it. Anyway, every one else does their role ok, but bad script and no story don’t help them. And I seriously want to raise a question.. why sikhism? because there is whatsoever no reason for it being there, except maybe for the title.

Man, I had hopes from this movie. Aneez was bad enough with his Welcome but I expected something of Vipul Shah after Waqt and Namastey London.. well seems like I was wrong, but still I’m waiting eagerly for London dreams. Only watch if nothing better is on…

END_OF_DOCUMENT_TOKEN_TO_BE_REPLACED

What others had to say….

Stuff I write about